Business Hours: Currently Closed. Estimated to reopen the weekend of May 1, 2022.

Weekend Brunch at The Clinton Inn

The Restaurant at The Clinton Inn is a home town, all American restaurant. Our Weekend Brunch menu delivers delicious and hearty items you won’t get anywhere else like our Southwest Chicken Waffle and our Huevos Rancheros Beef Brisket Skillet. We introduced the world to Brunch, Huffaker Style, in June of 2019 when the Huffaker Family purchased The Clinton Inn. It has become a popular brunch spot that many people have come to love and enjoy. We have a Mimosa Bar and a large Bloody Mary Bar to compliment Brunch, and we serve premium coffee, tea, and lattes from the Clinton Coffeehouse.

Our Weekend Brunch happens between 9am and 2pm on Saturday and Sunday, and features some unique items you won’t find anywhere else.

Enjoy a Nutty Mocha or a variety of premium coffee drinks such as Lattes, Mochas, and Espressos with your brunch, exclusively for brunch from the Clinton Coffeehouse! 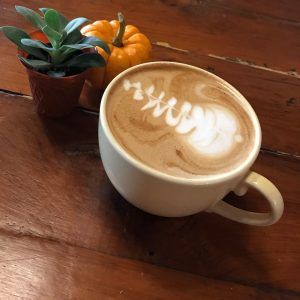 Enjoy our awesome Mimosa’s and Sangrias with brunch. 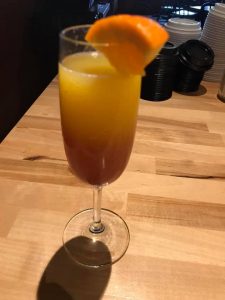 What’s Up With The Waffles!

Legend has it that in the early part of the century (circa 2002), Marvin Huffaker had been asking his wife for a Waffle Maker for Christmas for several years. However, for the longest time, she thought it was a joke and bought him socks and underwear instead. Then on a business trip to California, Marvin stumbled upon the most incredible waffle maker he had ever witnessed. He just had to buy it right then and there. It was a Professional grade Belgian Waffle Maker, and it soon became a fixture on top of the countertop at the Huffaker Household.

Marvin’s love for waffles turned from making waffles for the family on Sunday morning, to making waffles for neighbor kids that stayed over. Soon after that, the waffle craze turned into complete Waffle Parties. This was in Arizona, and friends from all over would come splash in the pool or hot tub, play board games inside, hang out and enjoy the back patio, and of course enjoy a variety of waffles and cocktails. We would experiment with different types of waffles as well as toppings.  Some were sweet dessert waffles, while others were savory and hearty.

Rightfully so, many people didn’t understand the waffle party concept, nor could they grasp the concept of a savory waffle. Most people think a waffle is just a sugary snack that holds syrup neatly in a little square. And many people questioned how a Cornbread waffle could even be considered food. But anybody that tried the waffles were quickly turned into raving fans.

The thought of opening a Waffle restaurant or even a Waffle Party catering business crossed Marvin’s mind quite a bit, but with scheduling and other business committments, it wasn’t a feasible option at the time. Not until Marvin and his family purchased The Clinton Inn anyway.  With the Clinton Inn, and the acquisition of the full commercial kitchen, we were presented with lots of options and  possibilties. So with Sunday Brunch, we decided to start introducing Michigan to Waffles… Huffaker Style.

We’ve taken many of our favorites and expanded or modified to make them even better, and we have some great hits and a few misses.  But to this day we have numerous Waffles on our menu, and regularly feature specialty waffles for limited time periods.  We hope you’ll come check out our Sunday Brunch and see what kind of waffles we’re offering that day. And once you try them we know you’ll be hooked! Here are a few waffles we have delivered: 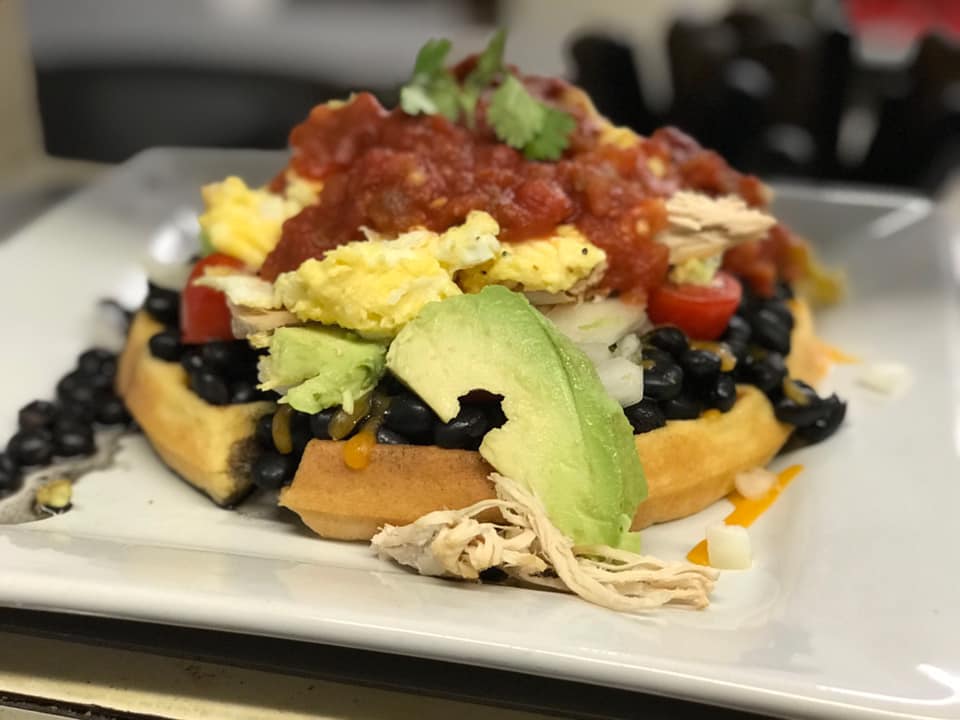 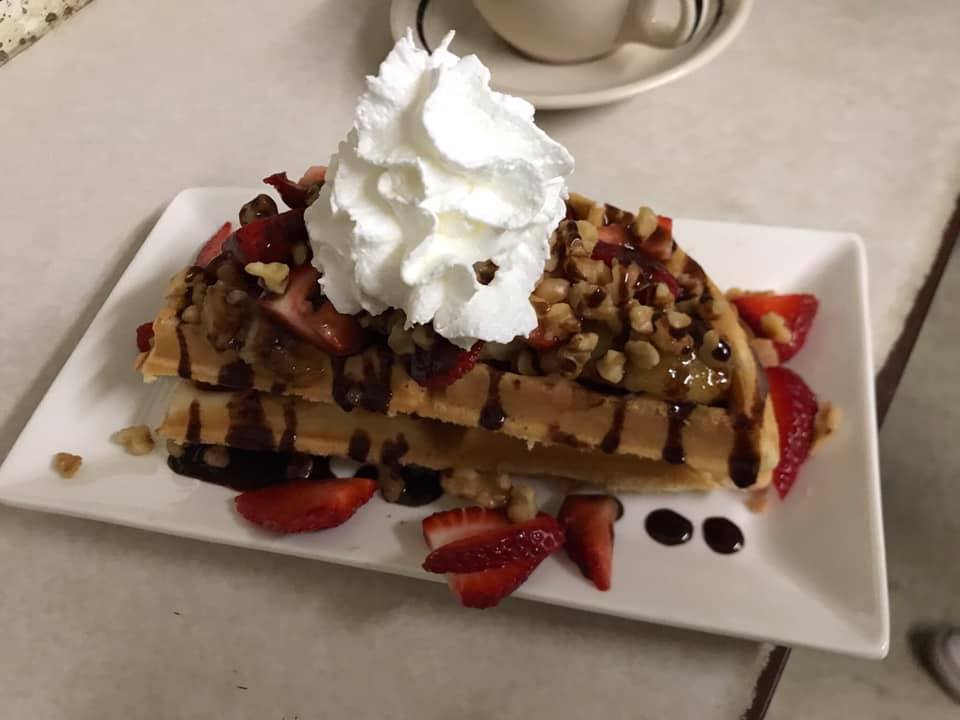 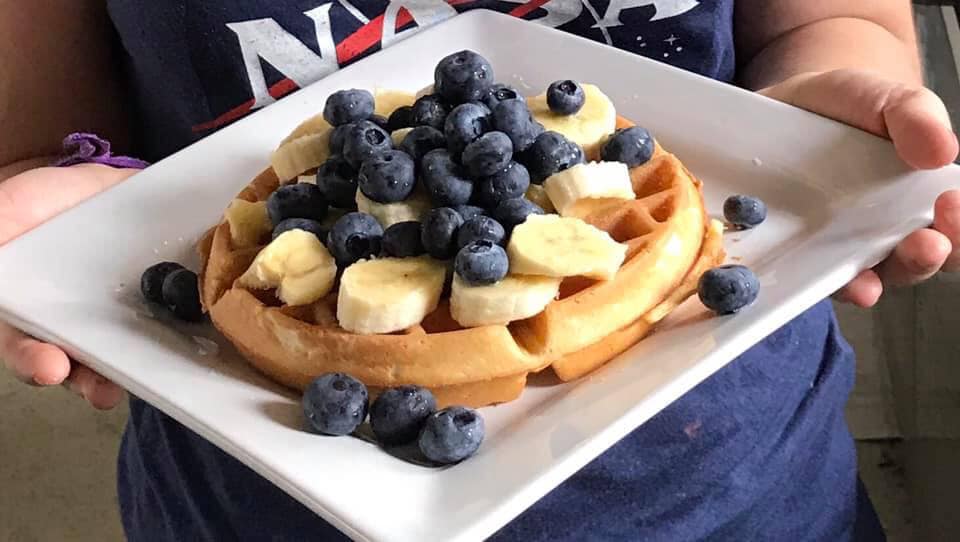 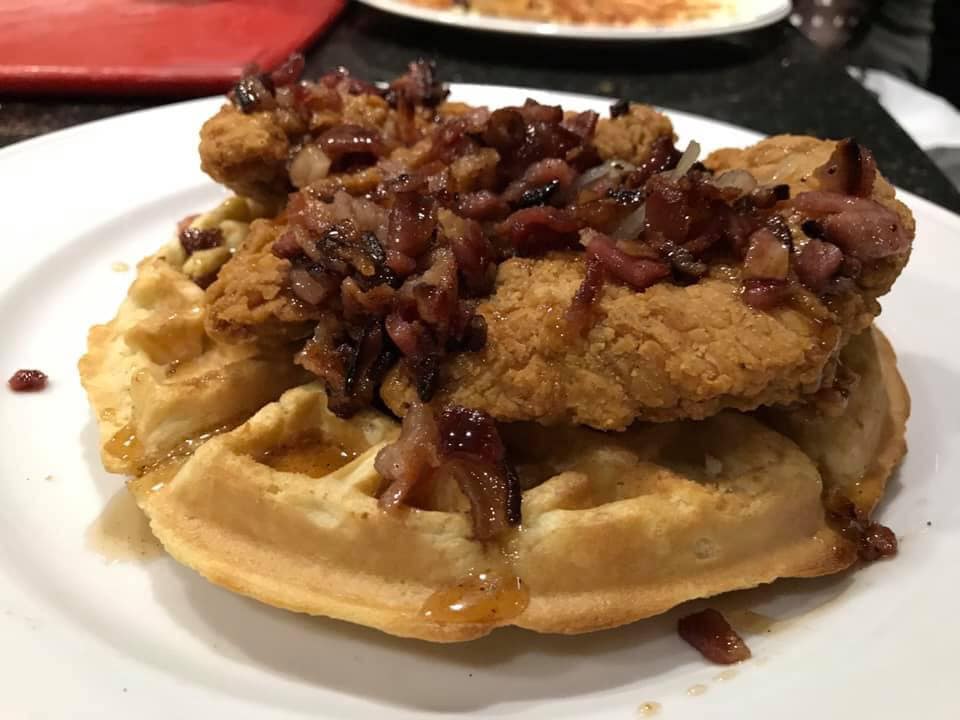 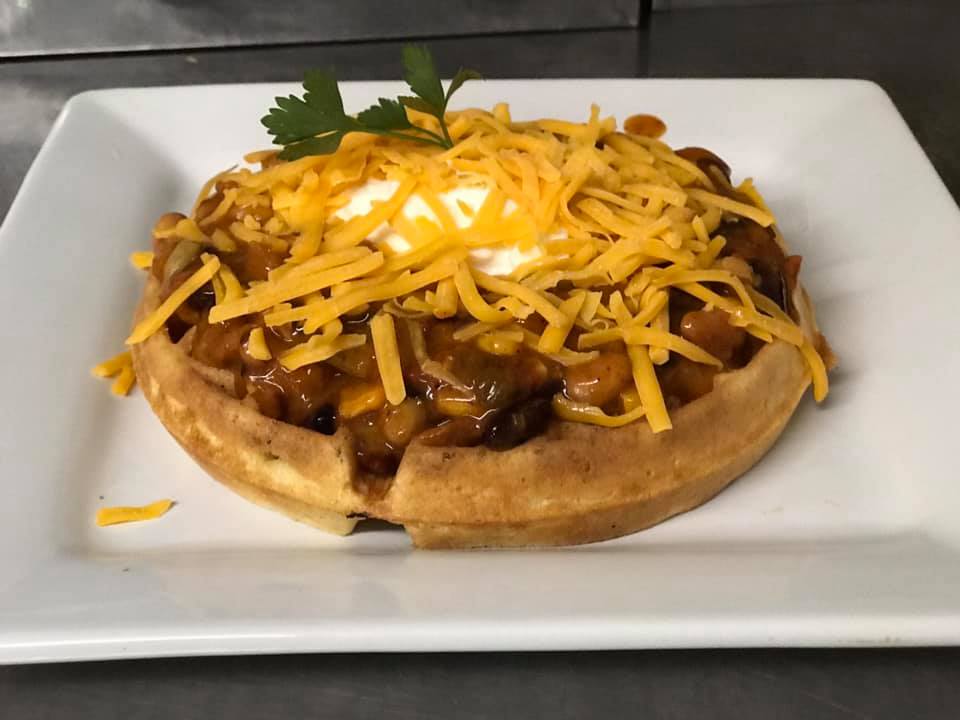 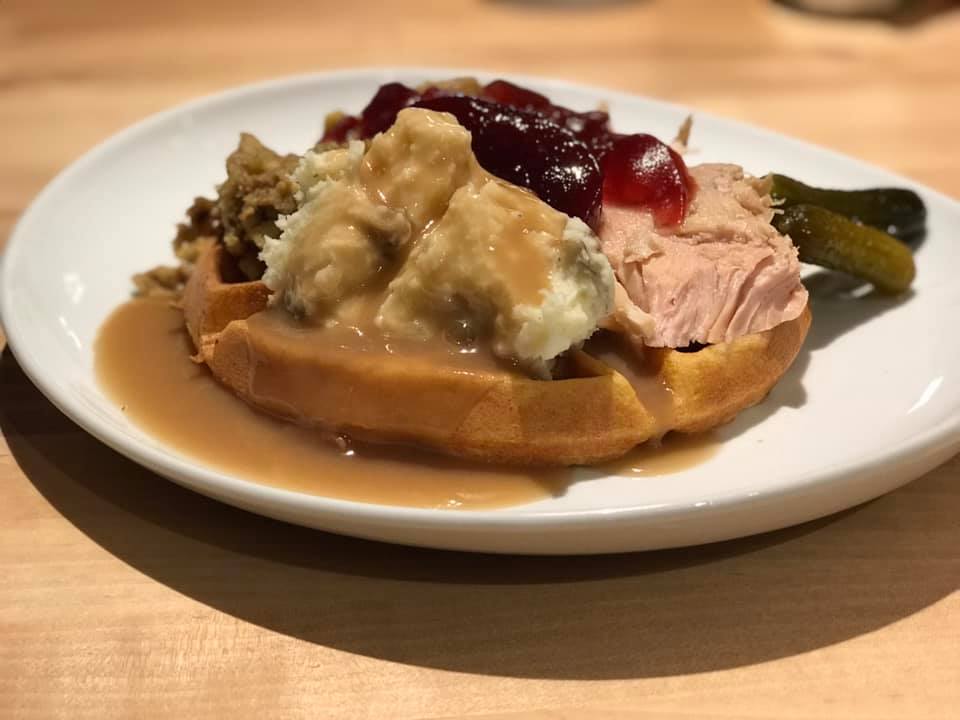 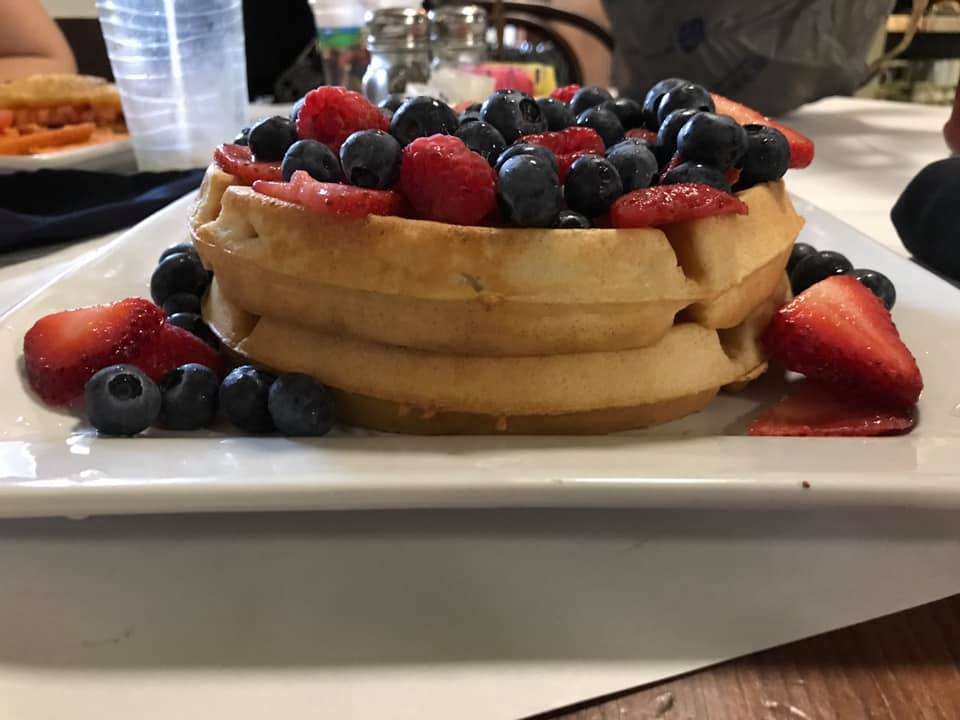 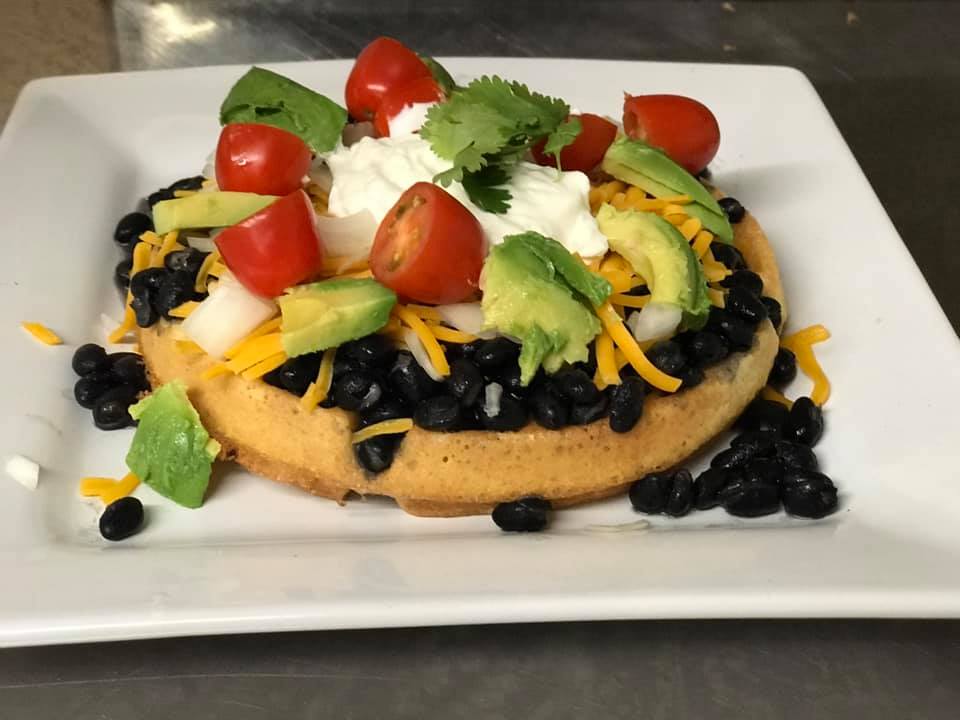 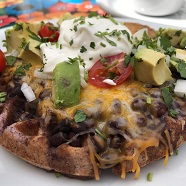 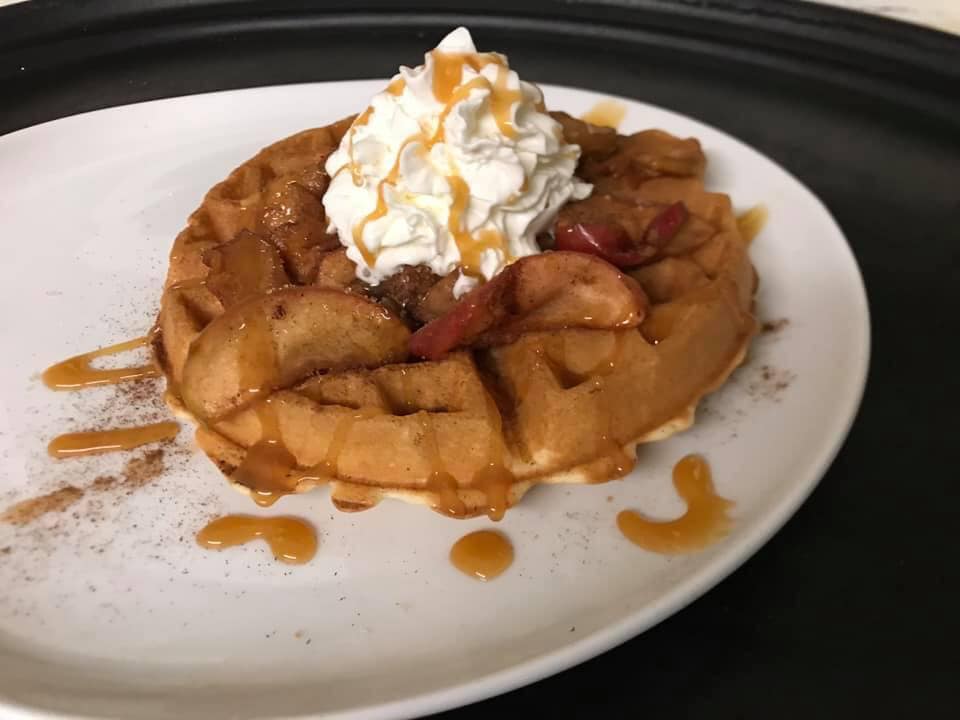 Since purchasing the Clinton Inn, we do occasionaly get questions about the restaurant in comparision to what the previous owners did during their 20+ year tenure of owning the restaurant. It’s important to understand that we are a new business with a new vision, and we have and continue to make many changes. Here are answers to a few of the questions we receive. If you have other questions that aren’t covered here, please feel free to fill out our contact form or reach out to us on Facebook.

Is the Weekend Brunch a Buffet?

Do you offer Gluten Free Options?

We have gluten-free bread and gluten-free buns that can be requested for any sandwich or burger. We use a gluten-free waffle mix for our sweet waffles, and we can make pancakes with the same batter. We can use gluten-free bread for French toast.  We currently are not able to accommodate any gluten-free fried foods like French fries or chicken due to only having a single fryer.

Do you accept reservations?

We currently do not accept reservations for our Weekend Brunch. All customers are served on a first come first served basis. We will accept, and sometimes require reservations for special dinner events such as Valentines Day or Thanksgiving Dinner.

Can you accommodate large parties?

Yes, but it depends. Our largest tables seat 6 people, and we may be able to push tables together. However, we cannot guarantee that adjacent tables will be available for a large party. If you have a large party, we suggest you contact us about our Private Parties and events.

Thanksgiving and Other Special Dinners

We are now offering Gift Certificates online in the amounts of $10, $25, $50, $100, and $200 for use in the restaurant at The Clinton Inn and the Clinton Coffeehouse.  You are able to purchase the gift certificate on-line and pay in full. Once we receive your order, we will mail you a physical certificate for the value purchased. The gift certificates will be valid for up to a year after they are issued, and can be used starting immediately once we re-open the restaurant and Clinton Coffeehouse.

Click the link below to go to our online store to purchase your Gift Certifcate and pay online. 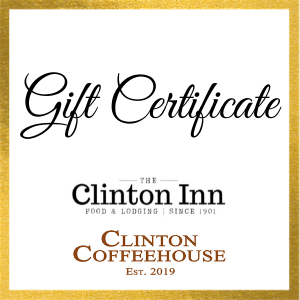